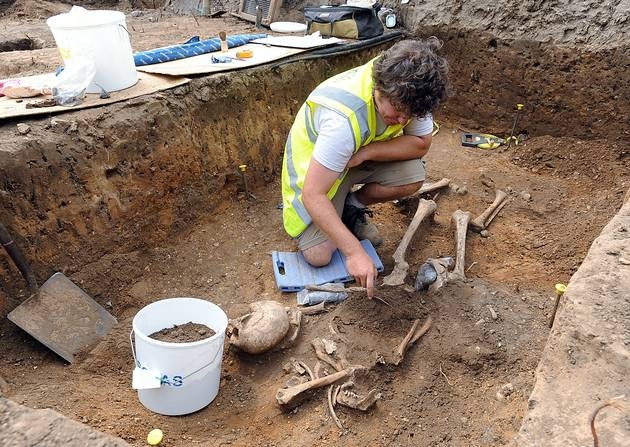 Let us turn, once again, to the problem of preserving cultural monuments, specifically the protection of archaeological monuments during construction. It’s an issue that’s particularly pressing in cities, towns and villages with centuries, if not millennia, of history under their belts, such as Novgorod, Pskov, and Staraya Ladoga. As the prosperity of Russians rises, the pace of housing and commercial construction picks up dramatically, and the foundation ditches and trenches for engineering communications almost inevitably cut straight through this rich archaeological layer of history and culture.

In order that these monuments be preserved, building works must be preceded by archaeological digs. A federal law on the protection of monuments, adopted in 2002, obliges developers preparing plots of land for construction to finance these digs. That pushes up the time periods for the construction works, and pushes up their eventual cost. The developer’s desire to minimize these expenses is understandable — keep the costs low, and get the archaeological digs over with in the shortest possible time frame.

That brings the developer into conflict with the archaeologists, who want to carry out the digs as carefully as possible and, as a result, want as much time as they can get. In practice, the conflicts are resolved in a number of different ways, each dependent on the specific plot of land being developed. Nevertheless, whichever way it goes, one of the two parties is always left feeling hard done by.

In order to regulate these relations between developers, archaeologists and the local authorities, there should be a system drawn up detailing the demands made on developers. With that system in place, it would be easier to find resources to carry out the digs, and to train up personnel capable of carrying out those digs and preserving whatever is found of cultural significance.

Various proposals on such a system have already been put forward. The idea from Sergei Troyanovsky, deputy chairman of the Novgorod Oblast Culture, Film and Tourism Committee and head of the State Department for the Control, Preservation and Use of Historical and Cultural Monuments, seems to make a lot of sense. Troyanovsky suggests that, before putting a plot of land up for tender, the mayor of Novgorod could commission archaeological digs. The expenses incurred could then be covered when the plot goes up for sale. That should also make the tender process a lot smoother, meaning that such a plot could be sold at a good price — it’s no secret that investors like plots of land where the archaeological digs have already been carried out.

An “archaeological development” of this kind could be carried out on a planned, systematic basis, and that means that the corresponding expenditures in the local budget could also be planned in advance. Various credit mechanisms could be put in place for projects of this kind, with their guaranteed profitability, and that means that the local budget wouldn’t be hit too hard, if at all.

In effect, this mechanism would create a new market — commercial archaeological services, with a volume of work known in advance, a demand for qualified personnel and financing at the ready. The growing demand for new real estate sites on the historic territories of the North-West region makes for excellent prospects for this new market. As the demand can be fairly accurately predicted, any personnel issues can be cleared up (the higher education institutions of the North-West can open new archaeological faculties or expand those they already have), and that will allow digs to begin when and where developers need them.

Sergei Troyanovsky’s proposal, which, incidentally, received the support of one of Russia’s most authoritative archaeologists, the head of the Novgorod archaeological expedition, Valentin Yanin, is also attractive because, on the one hand, it takes into account the interests of all the parties concerned (including the authorities and the general public), and on the other forces all those parties to make certain sacrifices. Thankfully, those sacrifices are made for all the right reasons — to preserve these historic and cultural treasures.

Both the federal and the oblast authorities, however, appear to be in no hurry to take up Troyanovsky’s idea. And they don’t appear to be in any hurry to adopt any other proposals either. Life goes on, however, and builders are working at an ever faster порно pace. If nothing is done, the interests of business, as the most powerful and effective in the sector, will no doubt win out, and in view of the current weakness of the state, it is our historic heritage that will be hardest hit.

Vladimir Gryaznevich is a political analyst with Expert Severo-Zapad magazine. His comment was first broadcast on Ekho Moskvy in St. Petersburg on Friday.